Menu
داخل ہوں
شمولیت
Install the app
You are using an out of date browser. It may not display this or other websites correctly.
You should upgrade or use an alternative browser.

FROM LONDON… WITH LOVE

FROM LONDON… WITH LOVE
Since the advancement in the Imran farooq murder case, media and propagandist have found another archival treasure to question the motives of Mr Altaf Hussein and MQM. The infamous letter by Mr. Altaf Hussein to the British PM is a joyous moment to treasure for those who claim MQM guilty on there talk shows. But today i am going to end this discussion once and for all. Please stop reading all those who have biased opinion about MQM, people who think they are fair, logical and reasonable should read ahead.

Firstly, Saleem Bukhari , Saleem Safi and Kashif Abbasi, the letter written ten years ago doesn’t help the fact that Pakistan is again under the rule of PMLN, which happens to be more incompetent than any political party ever. It also doesn’t help the fact that 9 years sitting at home and doing nothing, the leaders of PMLN were not ready for anything. They don’t have any terrorism policy, foreign policy or economic policy and they were not bothered to develop one when they were in exile, or when they were in friendly opposition. So i guess it’s not a big issue for you people, it’s just that letter which kills you.

Coming to the letter, lets understand this fact, be it army,PPP, PMLN , or for that matter Mulana Fazal ur Rehman, all have written and said, time and again, things that are derogatory to the Pakistani sovereignty or constitution. If, the letter by Mr. Altaf hussain is against Pakistan, then what would you say on what’s mentioned blow. 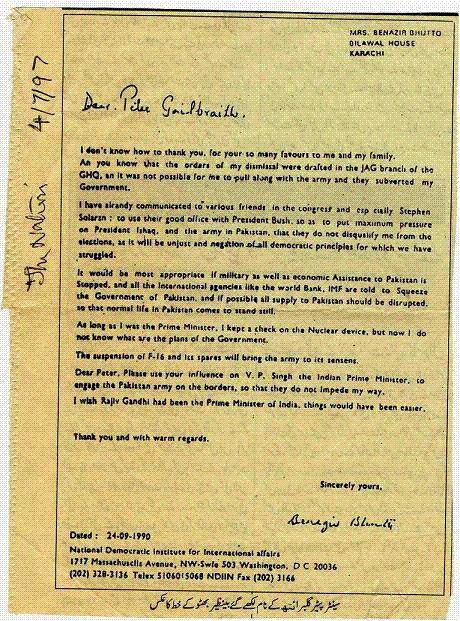 Great BB once wrote a letter in some context, which media always forgets while discussing Mr. Altaf Hussein’s letter, but I remember, so i am putting it up for your consumption.

Then Media’s favorite of today , Mian Nawaz who lacked the wit to write a letter but, and there is a big but, did a lot of things that were and against the core ideology of pakistan. What did he do in kargill, on the request of american president, he turned the first ever Pakistani victory against india into loss. Not only that, the u-turn by Nawaz Sharif brought disrespect to our forces as well.

What about wiki leaks, what does it say about Mulana fazul rehman, or about PMLN, why were they briefing about their every move to ann Peterson, the then US council General. forgetting the past is a crime, and selecting chapters from the past and presenting them as isolated incidences is heinous.

If we analyze the letter written by Mr Altaf hussain, it was according to the foreign policy of Pakistan. General Pervez Mushrraf, the then ruler of Pakistan and General Durrani, agreed to a lot more than what was written by Mr. Altaf Hussein. He only lended human intelligence support to UK and NATO allies.

The government of pakistan gave bases, supply lines, right to bomb any place in pakistan and right to pick up any person in pakistan was given by the ruling regime in 2001. Mr Hussein only asked to give extended monitoring support. He never asked to conduct operations on the will of the west.

But in those circumstance, it was not important what Mr. Altaf Hussein offered, the important part was what he asked.

As a nationalist, Mr Altaf asked in return of his services, what was best for the people of Karachi, sind and specifically Urdu speaking. He asked what was and is the right of the people of Karachi. He asked for the share in government. He asked for 50 percent jobs in government, he asked for provincial autonomy, he asked for local policing. These all are the basic demands of people living in Karachi . He never asked anything for himself or for his party, like BB or like Army. As a karachiite, his demands were right, so right for me. I give the money to run this country, I should have the right to rule this part of pakistan, according to my wishes.

Those who flaunt Mr. Altaf’s letter in media as a reason for article 6, should also then talk about the injustice in Karachi. They should also talk about the 63 percent revenue my city generates for this country and they should also talk about what I get in return. They should talk about how high-caliber youth of Karachi is running to different parts of the world, because all the good jobs in Sind does not welcome them. They should resolve once and for all that why Sind is Urban and Lahore is not. What more can I say, I have less police in Karachi per person than Lahore, and you are talking about the letter.​
جواب دینے کے لیے داخل ہوں یا شمولیت اختیار کریں۔
تشہیر کریں:
Facebook Twitter Reddit Pinterest Tumblr WhatsApp ای میل تشہیر کریں ربط شامل کریں
Top